This week we continue with our exploration of Vivaldi’s Seasons, taking a closer look at “Summer”, the most dramatic of the four.

I have chosen this incredible live performance with Janine Jansen and the Amsterdam Sinfonietta, directed from the violin. I love the way the musicians communicate such a huge spectrum of emotions, from stillness to the almost brutal wildness of the storm.

You can find each movement at the following timings. (NB Spring comes at the beginning at 0’00” of this recording)

As with Spring, the music vividly depicts the words of the sonnet, translated here into English.
You might like to follow the score which has the words in Italian:
http://imslp.eu/files/imglnks/euimg/c/c9/IMSLP386648-PMLP126433-Vivaldi,_Antonio-Opere_Ricordi_F_I_No_23_scan.pdf

Allegro non molto
Under a hard season, fired up by the sun
Languishes man, languishes the flock and burns the pine
We hear the cuckoo’s voice;
then sweet songs of the turtledove and finch are heard.
Soft breezes stir the air but threatening
the North Wind sweeps them suddenly aside.
The shepherd trembles,
fearing violent storms and his fate.

A series of extremely short phrases (often just two or three notes) create a restless uneasy mood, conveying the idea of the unbearable heat. As the energetic fast section begins the unmistakable cuckoo call is woven into the solo violin melody, and later many individually characterised bird calls, the rather mournful turtle dove (la Tortorella) with a call quite similar to our native woodpigeon and the high pitched trilling of the Goldfinch.

Adagio e piano – Presto e forte
The fear of lightning and fierce thunder
Robs his tired limbs of rest
As gnats and flies buzz furiously around.

Here the sustained solo violin melody depicts the exhausted peasant farmers as they gaze anxiously at the sky as a storm threatens. This is interspersed with faster sections representing the rumbles of thunder and leads straight into the final movement.

Presto
Alas, his fears were justified
The Heavens thunder and roar and with hail
Cut the head off the wheat and damages the grain.

The full fury of the storm is represented by cascades of extremely fast descending scales from all quarters of the orchestra. As the peasants feared, the harvest is ruined and the piece comes to a breathless finish. I remember witnessing such a storm on holiday in Italy when there hadn’t been a drop of rain for several months.

What is a Concerto?

A concerto is a piece for solo instrument (or group of instruments) with orchestral accompaniment. It is normally in three movements (fast, slow, fast). In this concerto you can hear the solo sections, often where the accompaniment is very light, allowing the soloist freedom to play with utmost delicacy, contrasted with the powerful sound of the full ensemble – in this case a string orchestra with harpsichord.

You might like to listen to, and for more advanced players maybe learn a movement of a concerto for your own instrument.

You might like to find out more about Vivaldi, one of the most influential composers of the Baroque period and also an ordained priest. Although he spent much of his life in his native town of Venice, he travelled throughout Europe, hob-knobbing with nobility and royalty, and was extremely famous both as a composer and a virtuoso violinist of almost rock-star status.

He was an extraordinary teacher and many of his compositions were actually written for his pupils at the Ospedale della Pietà, a home for orphans and abandoned children in Venice. There is actually a window in the Ospedale which is just big enough to put a child through, and this is how many of the children were delivered in secret to the orphanage. There the boys learnt a trade and the girls studied music, and the most talented were allowed to stay on as adults as members of the prestigious “Ospedale” Orchestra and Choir which became famous throughout Europe. Many of the children were deformed and played behind screens so that they could not be seen by the audience – an attitude which would be completely unacceptable in our day. 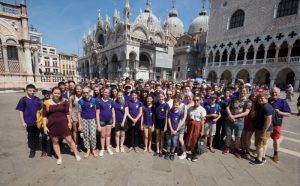 The Concert Band in Venice in 2018

You may want to find out more about this extraordinary place, especially if you visited it on the 2018 Dark Peak concert tour. There are many interactive guides but I can thoroughly recommend the BBC documentary “Francesco’s Venice” told through the eyes of Francesco da Mosto, a descendant of one of the oldest Venetian families. The series is available on Youtube (NB. it is a 15 certificate).
https://www.youtube.com/playlist?list=PLv5SMbYXjLatOKqsVPB-6bB3lHahR9CT2

You might like to trace the origins of some words which have come down to us from Venetian history. For example, did you know where the word “quarantine” comes from? The word originates from quarantena, the Venetian language form, meaning “forty days”. Venice was on the spice route from East to West and this was the isolation period ships and traders practised as a measure of disease prevention related to the plague.

The word Arsenal (not the football team) comes from the Arsenale which was the Venetian warship building yards. This was the first production line …. They could produce a ship every day, fully kitted with its weaponry where most nations could only build a few each year. This was one of the main factors in Venice becoming the heart of a mighty empire.

The Violin-Makers of Cremona, Northern Italy

You may have heard of the incredibly valuable stringed instruments made by Amati, Guarneri and the most famous of them all, Stradivarius, who was working around the time of Vivaldi. When one of these most perfectly crafted instruments comes up for auction it can fetch several million pounds, however many are now kept in museums and private collections where the design is studied and copied and sometime loaned to eminent soloists. Janine Jansen, the soloist in our recording, currently players on a Stradivarius violin made in 1727 which is about 10 years after the Four Seasons was composed.

To find out more about Strdadivarius violins , here is is an interesting article: